The idea of flatbread preparation dates back to 30,000 years ago when people used the roots of a plant to extract scratch, and make bread. This brings flatbread among the oldest foods prepared in the world.

Today, there are numerous types of flatbreads, and it is largely consumed in the Middle East, South Africa, and other regions of the world. The Arabs are specifically known for crafting the most delicious and versatile flatbreads. In addition to Arabic flatbreads, South Asian origins have also gained much attention internationally.

If you are a food lover looking for quality bread to try this World Bread Day, you’ve come to the right place. Read ahead to find a list of the most palatable and popular flatbreads in the world.

What Is A Flat Bread?

The name “ flatbread” itself is self-explanatory. It is a type of bread that is made with a special type of dough, knead, rolled out, and then baked in a fire oven/stove. For the past 5,000 years, people have been following the conventional flour plus water recipe. In ancient times, the dough was cooked on a rock heated with fire.

The bread recipe in modern-day varies from culture to culture. Some people make it with unleavened dough, whereas others prefer leavened dough that is flattened and cooked in a fire oven. The addition of olive oil, herbs, and yogurt is also a common practice observed in the preparation of flatbreads around the world.

The addition of oil favors even flattening and proper integration of each element in the dough. Then comes the kneading part, which most people like about the cooking process the most.

Flatbreads may vary in color, size, shape, or toppings in different regions, but the taste and standard ingredients remain the same. Some also add yeast to the mix to prepare a leavened bread with an appropriate rise. However, the basic concept of flatbread remains the same, a bread that is flat.

Bread is a primary part of every meal in Europe, South Asia, the Middle East, and the Western world. It is prepared with a type of flour, mostly wheat, but barley, rye, all-purpose flour, maize, rice, sorghum, and millet are also used. In some cultures, the traditional bread recipes are carried down to generations, keeping a particular element of the native cuisine alive.

World Bread Day history started the day when the first ever bread was prepared, thousands of years ago. Since then, the significance of this food has extended, expanding its significance beyond a source of nutrition. Bread has evolved to become an identity in some traditions. Not only that, it has become an important element in the rituals of Judaism and Christianity over the years.

World Bread day is celebrated worldwide, on October 16th, which signifies the day of the establishment of the United Nations Food and Agriculture Organization(FAO). The commemoration of the organization took place back in 1945 with the objective to fight off global hunger. World Bread day is celebrated on the same day as World Food Day, fulfilling the Latin motto of FAO, i.e., Fiat Panis, meaning “ Let there be bread.”

10 Must-Try Flat Breads For Everyone

People who have never tried flatbread are surely missing out on the delicious taste, and the indulging experience of having a carb-infused, quality meal.

A flatbread is prepared in a fire oven (aka flatbread oven) and served with a side dish most of the time. You can also dip a piece into your favorite short or enjoy it with your choice of toppings. There are many popular bread recipes around the globe, some with toppings, others plain, but each one is so unique and yummy that you might just get hooked after the very first bite.

So what are you waiting for? Find a few recipes to try on this World Bread Day, or head over to an Arabic or South Asian restaurant to taste a new type of flatbread on this auspicious occasion meant to celebrate the staple food, i.e. bread.

Here is a list of the most popular flatbreads for you to try this October.

One of the most widely recognized flatbread names around the world is Pita bread. It is known to have risen from the Lebanese or Syrian regions and is served as wraps, sides, or main courses in most restaurants. The soft bread is like a light and airy puff of flour, baked at high temperatures for a perfect cloudy texture.

A properly baked pita bread has a pocket in between, which is a result of dough separation that occurs at high temperatures. The pocket is used as a holder for toppings and stuffings of different meats and vegetables, etc. Pita bread is largely consumed in the East and West as a stuffed bread and is also appreciated for its fluffy texture and melt-in-the-mouth bite.

A Turkish version of flatbread, pide ekmek is a staple breakfast, lunch, and dinner element in Turkish cuisine. This bread is made with a mixture of flour, sugar, yeast, and warm water. The dough is kneaded and sprinkled with parsley, poppy, and nigella seeds before being baked. The procedure of adding an egg wash on the top makes this version of flatbread quite a contestant in the flatbread listing.

It goes really well as a base for dips, and also works as a scoop for delicious casseroles, curries, and stews. Pide ekmek also makes the perfect base for tombik, a meat-stuffed Turkish sandwich.

Manakish bread is a popular Middle Eastern bread, native to the Levantine region. It is a special type of Middle-Eastern bread that is served with za’atar, keshek, cheese, onion, and other toppings.

The homemade dough is flattened into a size of a pan pizza, and served as folded bread, for convenient biting. Some also add spices like oregano, seeds, thyme, and marjoram on top of Manakish bread for added flavor.

Foccacia is an Italian bread that is baked in the oven and looks similar to pizza bread. It is often topped with olive oil, herbs, rosemary, sage, basil, and spices. It can be consumed as a main course side or a pizza base. In addition to that, stuffed focaccia makes a great sandwich, incorporating a burst of flavor in each bite.

Khakhra is a crispy bread that belongs to the Indian state, of Gujrat. It has an almost cracker-like texture, subject to its preparation with mat bean, wheat flour, and vegetable oil. Crispy bread is widely used as a breakfast snack in India and other South Asian countries. Dip it in an Indian-style curry or chutney, and enjoy the flavorful blend of flatbread goodness in each bite.

Ladenia is a Greek bread that looks like a flatbread pizza, with gracious seasonings and condiments. It is topped with onions, tomato slices, and Greek olive oil to turn it into a delicious savory dish. The dough consists of yeast, flour, salt, and water, whereas some recipes also incorporate olive oil.

Sometimes, fresh tomatoes are swapped with tomato paste, subject to individual preference. However, the taste and texture of the flatbread would suffice in each variation. You can think of Ladenia as the Greek version of Italian pizza.

Chebab bread is a pancake-like delicacy, served with honey syrup or date molasses. Some also serve a cheese spread on the side for an added hint of dairy flavor. 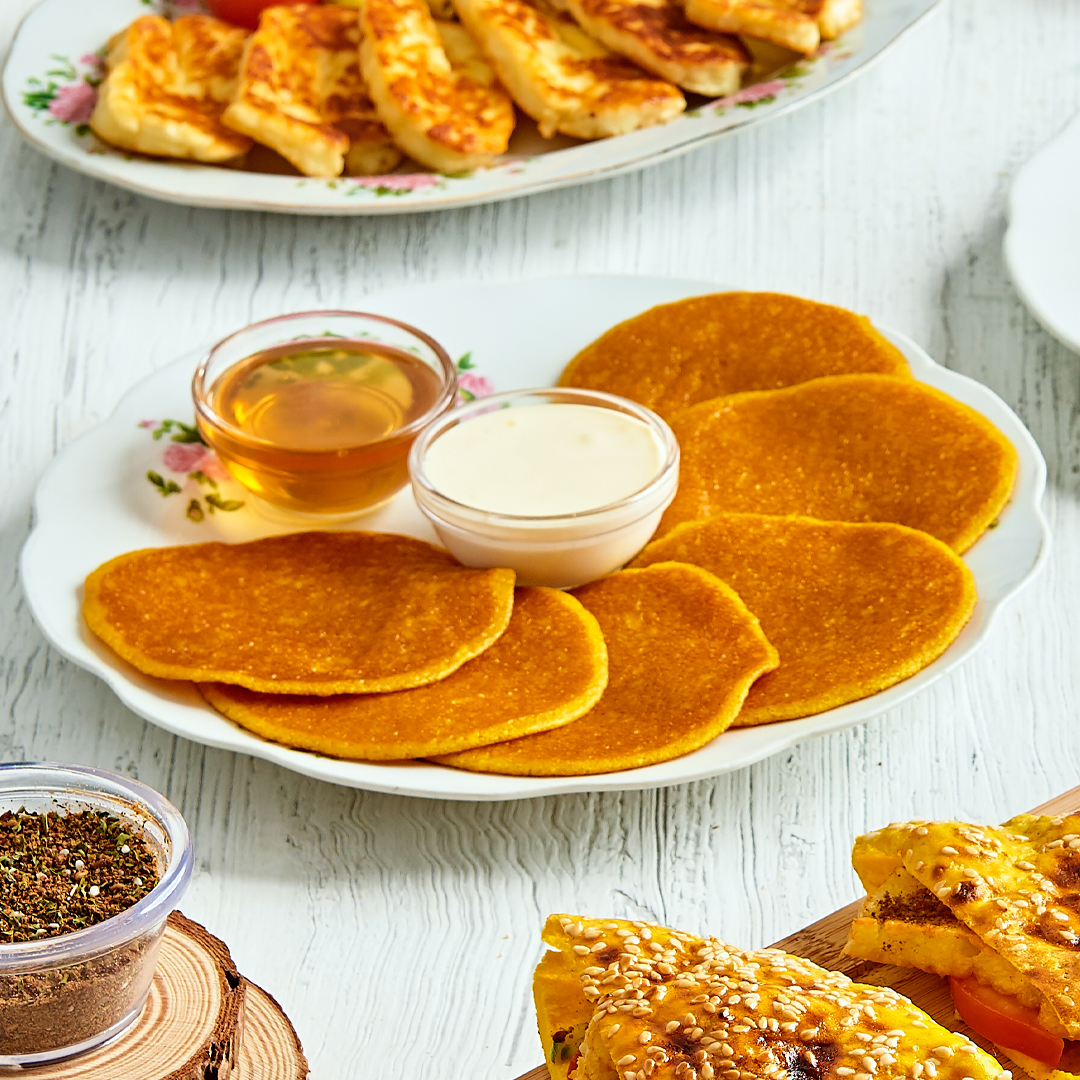 It is an Emirati recipe that follows the same basic principle as that of pancakes. However, unlike pancakes, this bread also contains yeast, turmeric, and cardamom as mandatory elements. It is a perfect breakfast flatbread for those with a sweet tooth.

Khubz Tanoor, also called naan flatbread, represents Levantine and Iraqi cuisine. The basic ingredients are the same, but the differentiating feature of this flatbread is its yeast bubbles. The baking of the bread is often performed with a traditional fire oven, which helps raise the dough, forming small to large air bubbles on the surface of the bread. 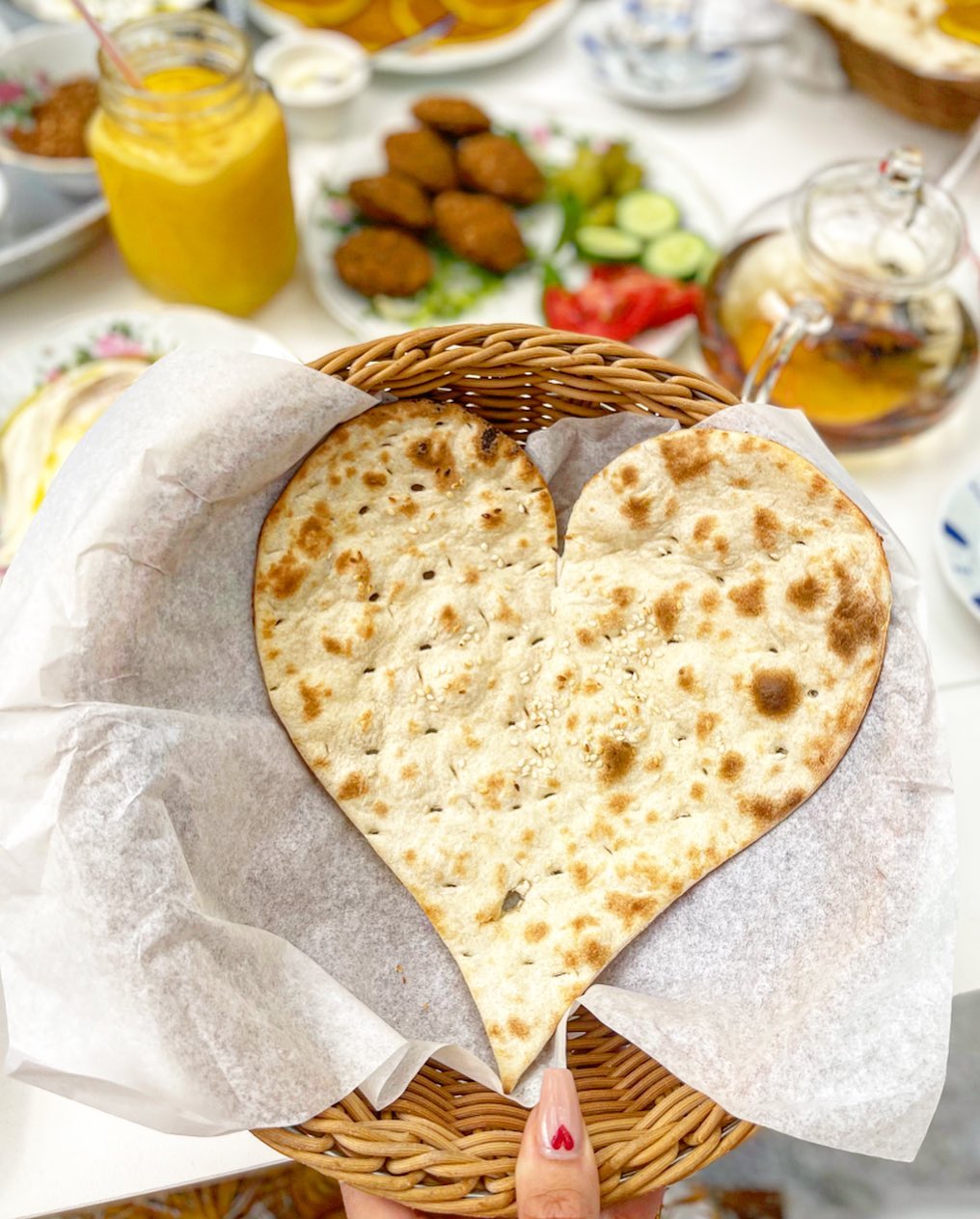 Some people prefer their tanoor bread with cheeses and za’atar toppings. Others like to dip it in stews and soups to satisfy their hunger and flavor desires.

Raqaq is a traditional type of bread largely found and consumed in the Emirates. It has a paper-thin texture and is crispy to the bite. The preparation of raqaq is similar to that of Indian dosa. It involves spreading the dough on a medium-hot pan with the help of a special spoon/scoop. 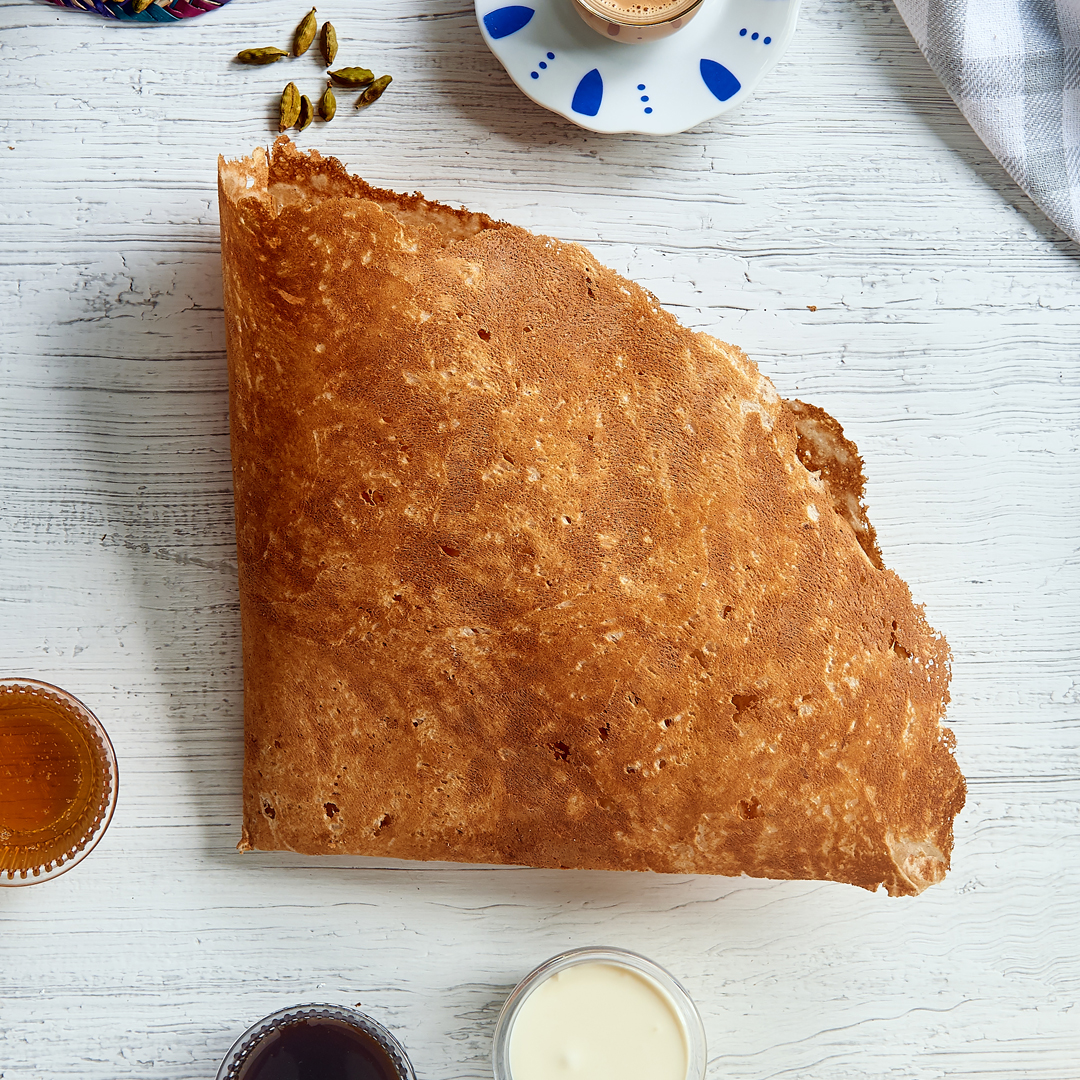 The type of pan used for this type of bread is a flat Tawa (Indian-style pan), heated with dry palm leaves. You can also use a non-stick pan for the preparation of raqaq bread. While the traditional method of preparation delivers a more refined taste, the modern method is also quite effective.

Khameer is the name used for yeast in Urdu. Owing to its name, it’s a type of leavened bread that contains yeast as the raising agent. The origin of khameer bread is mainly associated with Levant and Emirati cuisine, and it is often served with cheese. 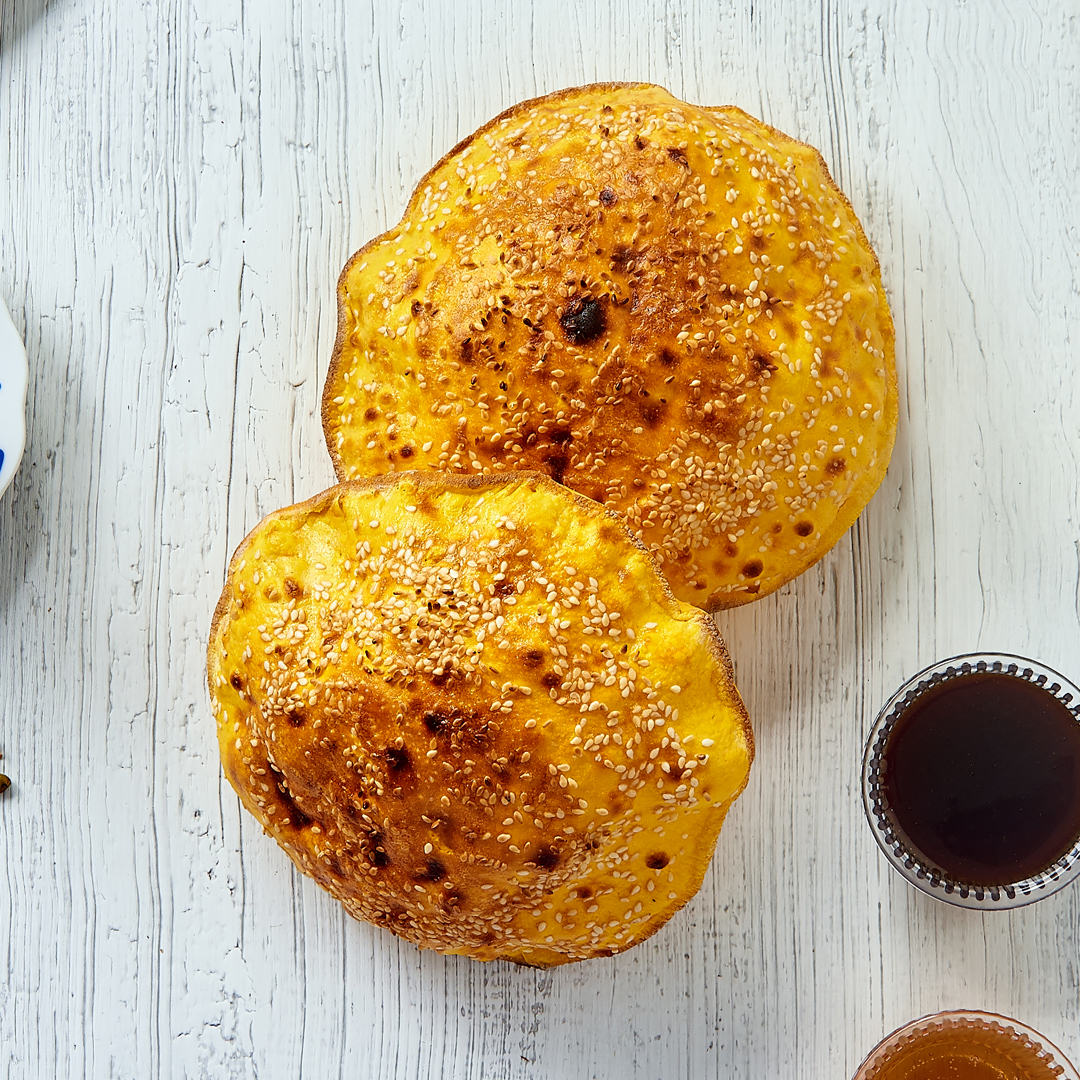 The dough, when combined with additional ingredients, like saffron and herbs make up a flavorsome meal individually. It is also often consumed and loved in combination with the main dish like a stew or curry.

The paratha dough is similar to any other type of flatbread, except it incorporates a generous amount of ghee. A small amount of ghee/butter/oil goes into the dough before it is rolled out. The paratha is then prepared on a flat pan with an additional dollop of shortening or ghee for a nice and rich touch of buttery flavor.

Appreciate Bread On This Occasion:

Bread must be regarded for the nutrients and energy it adds to our daily meals. It’s a great source of carbohydrates, as well as a suitable fit for every type of cuisine. That is why it must be appreciated, and not wasted.

UN has been working rigorously to control the waste of bread, but as consumers, the responsibility to prevent misuse and wastage falls on our shoulders as well. This International Bread Day, you can show your dedication to food safety by eating your bread completely or sharing it with someone around you. Try out a new type of bread to satisfy your hunger, and celebrate the day simultaneously.

You can now enjoy a range of flatbreads available at Arabian Tea House. Try a new variety, and show your respect for World Bread Day by finishing your meal completely. Have a look at our menu to find popular Arabic stuffed bread, bread with toppings, as well as plain bread.

Head over to Arabian Tea House for a complete meal, served with flatbread on the side. We also serve bread served as the main course, with a number of toppings, fillings, and stuffings. Call us today to make a reservation, and celebrate World Bread Day with us!